There are two things I’m glad I’m not this fine Sunday morning: My neighbor’s poor little dog who was accidentally left outside in the cold last night, and Nate Marquardt’s battered and bruised left thigh (Pictured).

Despite requiring the use of crutches to get around, which is completely understandable considering the punishment his lead leg received courtesy of countless Tarec Saffiedine kicks, Marquardt claims things looked much worse immediately after last night’s unanimous decision loss.

“Swelling has gone down from last night believe it or not. Should’ve checked those kicks!” Marquardt posted on his Twitter account. “Wasn’t my night but I’ll be back stronger.”

Note to self: Check leg kicks. Got it!

After receiving just one of those vicious leg kicks I would have tapped out (screaming like a little schoolgirl constitutes a verbal submission, right?), but props to Marquardt for being a warrior for 25 oh-that’s-gonna-leave-a-mark minutes.

The bad news, “Nate the Great’s” left quad could soon look like Urijah Faber’s after Jose Aldo continued to give it the business at WEC 48: 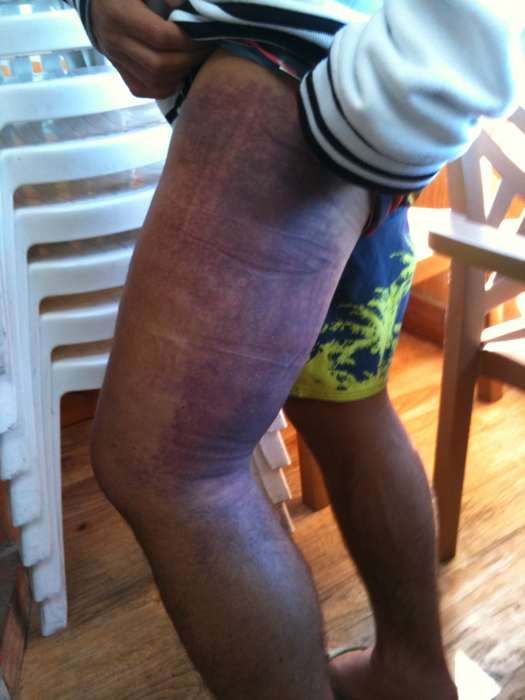 In addition to blistering Marquardt’s leg, Saffiedine also took his Strikeforce welterweight belt in the process.