Can you imagine landing more significant strikes and total strikes in all three rounds and still wind up losing to your opponent? Well, that’s exactly what happened to Takanori Gomi (pictured) against Diego Sanchez on Saturday night at UFC on FUEL TV 8.

According to FightMetric, Gomi connected on 28 significant strikes to Sanchez’s 22 in the opening frame. Gomi then landed 31 to “The Dream’s” 27 in the middle stanza. In the final five minutes, Gomi connected on 22 strikes while Sanchez hit him 16 times.

As for total strikes, Gomi beat his opponent 81 to 68.

Sanchez took “The Fireball Kid” down twice in the first round, but didn’t unload anything devastating for the brief moments the fight was on the ground. Gomi didn’t attempt a single takedown throughout their 15-minute affair.

“How the f*** did Diego win that fight!? Crazy s***,” UFC president Dana White tweeted immediately after the verdict was rendered.

Here is the official box score for Gomi vs. Sanchez: 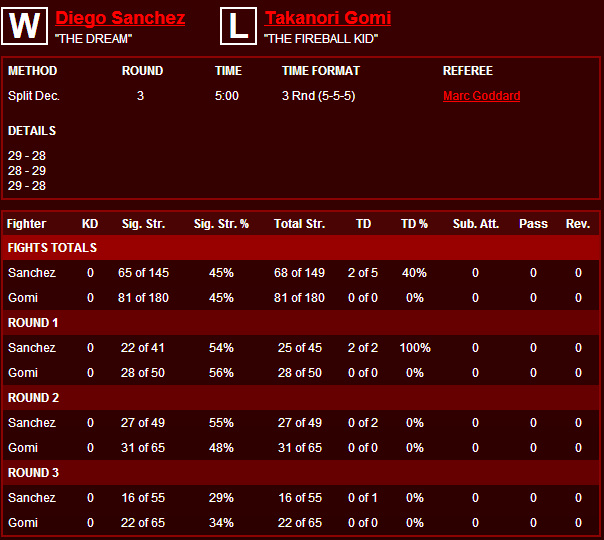