And then there were 12, as in only 12 fights that will take place tomorrow at “UFC on FUEL TV: Nogueira vs. Werdum.”

With only two hours remaining until Derek Brunson (pictured) was to tip the scale for Saturday’s shootout against Ronny Markes, the middleweight was informed Markes had to withdraw after he was involved in an automobile accident in Brazil Friday morning.

UFC president Dana White told MMAFighting that Makres suffered a concussion and back and neck injuries in the collision.

White also confirmed both fighters will receive their show money.

The 185-pound affair was slated to appear in the card’s prelims.

Here is a pic of Markes’ wrecked car (courtesy of SporTV Globo): 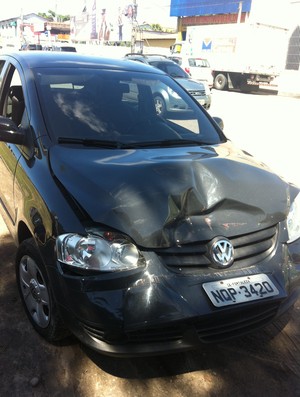