Phil Davis pulled off the impossible on Saturday night at UFC 163. No, beating former light heavyweight champ Lyoto Machida (pictured) wasn’t his miraculous accomplishment, even though Machida was nearly a 4-to-1 odds-on favorite to hand Davis his second professional defeat, but Davis took a close fight in Machida’s homeland of Brazil.

Most journalists sitting press row believed Machida did enough to earn a decision win. However, when the (29-28, 29-28, 29-28) unanimous decision verdict was read, it was Davis who was jumping for joy while Machida was left with a puzzled look on his face.

According to the UFC’s official number crunchers, Machida landed 10 significant strikes in the opening round to Davis’ eight. Although, Davis connected on more total strikes (12) than Machida (10) and he secured a late takedown.

In the final frame, Machida doubled up Davis’ significant strikes with 10. Davis landed six total strikes that round, while all of Machida’s strikes were listed as significant in the last five minutes.

Machida thwarted all four of Davis’ takedown attempts in the last stanza.

When it was all said and done, this is how the three judges saw things (Courtesy of E. Casey Leydon): 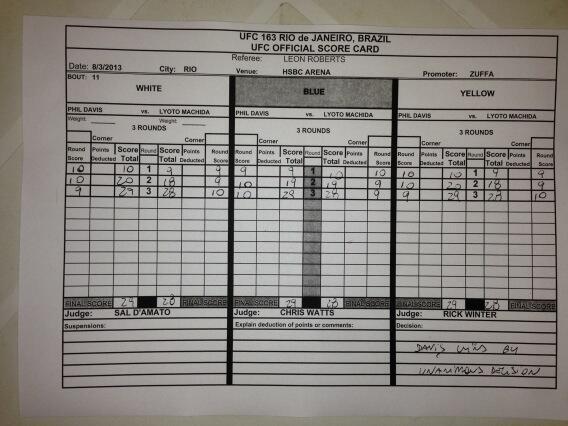